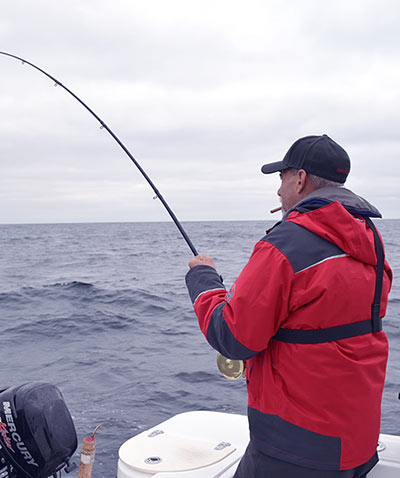 Guests come to Naden Lodge for a multitude of reasons but THE FISHING is the common denominator. Our home, on Haida Gwaii’s (Queen Charlotte Island’s) north coast, is in the middle of the salmon’s migratory route on the way to their natal streams. Whether they are headed to the major river systems of mainland British Columbia, the west coast of the United States, or the multitude of salmon streams on the west coast of Vancouver Island, these fish must first pass the Queen Charlotte Islands. Literally millions of salmon swim past our doorstep.

They include the Chinook (King), the tackle-busting giants of the Pacific. These mighty salmon can reach a 100 pounds as many are found on the banks of the spawning rivers with spawned out weights over 100 pounds. The largest Chinook salmon taken in our waters was a monstrous 84 pounds that was landed in 2011. The next most sought after game fish is the spirited Coho (Silver) salmon, which are very acrobatic and can be caught with a salt water fly rod. These fiesty fighters can reach weights up to 25 pounds. There are also Chums (Dogs), Pinks (Humpies) and Sockeye (Reds). The bottom fishing is consistent with Halibut, Ling Cod and many species of Rock Cod. Our salmon fishing season runs from mid May to early September with consistent salmon fishing during those months.

Just minutes from the dock is the first halibut and salmon fishing spot, across Masset Inlet to the Eagles Nest. Heading north out of the inlet, the Pacific Ocean opens up to a vast area of time proven fishing hot spots. The Green Can, Hidden Island, Wiah Point, Cape Edenshaw, Bird Rock and Shag Rock to name a few of our favorite spots on the Queen Charlotte Islands. Our very experienced guides know the historical migrations and when and where to be. Every day out on the water, from May to September, you have a chance at a 50 plus pounder. What other fishery can state that!

All ocean fishing on the Queen Charlotte Islands is fully guided by expert local guides who will tailor your trip to your desires. Whether you are a beginner who will need lots of help or an old pro who wants to run his own gear, we can ensure your experience is everything you hoped for. Our guides are happy to show you how to run your own downrigger, set up your own bait, and teach you the fine art of downrigger fishing, trolling or cut plugging. Each day of your trip we will try to fish 2 tide changes, where we fish through the tide change slacks, when most species of fish feed.