About the Haida Gwaii 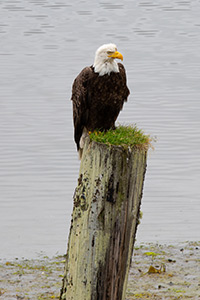 Haida Gwaii (formerly the Queen Charlotte Islands) is 300 km long, in a rough triangular shape from 100 km wide across the top, tapering to a point at Cape St. James at the south end. Tucked under the coastline of islands that form the Alaska panhandle, they are 75 km from the American border, approximately 120 km west of the outer islands of the northern BC coastline, and 770 km by air from Vancouver, BC.

Haida Gwaii is a collection of about 150 islands resting on the western edge of the continental shelf. There are two main islands, Graham Island to the north (home to Naden Lodge) and Moresby Island to the south. About 5,000 people share these islands, most residing on Graham Island in the communities of Queen Charlotte, Tlell, Port Clements, Masset (home to Naden Lodge) and the two native Haida communities of Skidegate and Old Masset. Sandspit is located on the northeastern tip of Moresby Island. A 20 minute ferry ride and 130 kilometers of pavement connect the two islands and their communities.

These islands have been home to the native Haida people for thousands of years where they thrived on the natural abundance offered both by the land and sea. The Haida people are renowned for their distinctive art and totem poles, many of which can be found near our lodge in Masset. We would be pleased to introduce you to local artists during your stay if you so desire. In fact, the Naden Lodge logo is a native Haida representation of the Chinook Salmon.