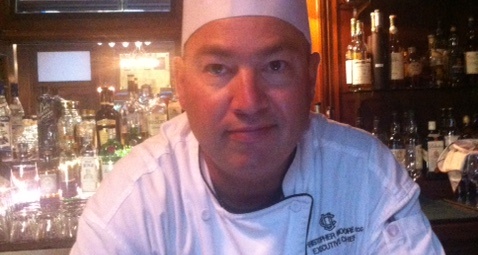 Your Executive Chef Christopher Moore has had an interest in cooking since the young age of 14. Prior to taking his formal culinary training, he spent time in the military with the Patricia Regiment where he learnt the value of hard work. Christopher then went back to complete high school. In order to pay the bills he took an evening job cooking, and this stirred his interest in cooking for a living.

In the 1980’s Christopher took a three year course at George Brown College in Toronto. Receiving his Culinary Management Degree as well as a Food and Beverage Management Diploma.  He did well and quickly finished his apprentiship and obtained his Red Seal Certification. During his evenings he cooked at the trendy Queen’s Quay Terminal.  His summer months were spent gaining experience with Canadian Pacific at beautiful Lake Louise in Banff.

But Christopher was looking for more in his career.  He decided to try a completely different which also included travel. So he joined the MV Sea Lion vessel and spent two summers on the north coast. Then, a major event happened in his life, the birth of his son in 1997, this event influenced Christopher to head back to a dry land and find a place to raise a family.

In the fall of 1996, Christopher was hired by The Union Club of British Columbia in Victoria where he progressed up the ranks over the next 19 years – first as a Chef Saucier; then the Banquet Chef for 10 years; the Sous Chef for two years; and lastly, the Executive Chef for the last four years.  While at The Union Club, he completed the working chef program and then completed his Canadian Federation Certified Chef de Cuisine program at SAIT

After a successful career at the club, Christopher grew restless and decided it was time to seek new opportunities. He was quickly hired by Royal Caribbean Cruise Lines and was to be assigned to their newest and biggest ‘super ship’, “The Quantum of the Seas” which had just finished its inaugural voyage, and was serving the Asian market.  Christopher was implemented to ensure the JI philosophy was followed in the newly contracted Jamie’s Italian.  After working directly with the Jamie Oliver group at their flagship restaurant in London, England. He was flown to Shanghai where he boarded the Quantum. The Quantum of the Seas served approximately 4800 passengers and 1600 crew daily. While working with Royal Caribbean, Christopher was eventually assigned to progressively larger venues on the ship – first to look after their Specialty restaurants, then to the crew galley and finally finished managing the main galley, and the food production of the ship. After two years in Asia Christopher decided to return the beautiful west coast where he meet up with Naden Lodge team.